Yesterday was one of the hardest days of distance learning, today was one of the easiest.  Chris was fairly focused and managed to get all of his work done.  Lillie is still plugging along, but apparently she napped through her band class today.  Oops!

And today’s bad news is hard to take: My hairdresser doesn’t know when she will be re-opening.  I had an appointment in April, which I rescheduled to May when her Sola branch closed down and now they won’t be open for May.  I grabbed the first possible appointment in June, but my roots are going to be terrifying by then!  To be fair, Pat has offered to color my hair for me, but no.  Just no.  I’ll wear a hat!

I think that Pat got a bit antsy today.  He had a sudden urge to go to Costco and ended up spending quite a while browsing while there.  Since the quarantine began, I’ve gone to Costco with him, but I stayed home this time.  I’m not sure we were in need of anything at Costco, but we were able to scrounge up a decent list.  I think there may have been Lowe’s stop on the way home.  Before you get on his case (because that’s my job!), he was gloved and masked and he said he maintained his 6 feet distance.

Alice did have another opportunity to show her strength and/or protect her domain today.  She went outside for a bit while Chris was in the backyard–which we let her do.  She’s 99% an indoor cat, but does get some outside time when we’re with her.  Chris came running in to warn me about a cat in the back.  When I went out there, she was in the corner of the yard, with the emotionally fragile German Shepherd barking at her on one side (on the other side of the fence) and the black cat who lacks boundaries sitting on the fence on the other side.  I swooped Alice up before she opened her can of whoop-ass, but I don’t think she was happy with me for killing her chance to assert her strength.

I have no fun pictures of the goings on today, but this past weekend was the NFL draft–which is a big thing in Pat’s life.  I didn’t watch because there were about three dozen other things I would rather do, but Pat spent a lot of time kvetching about the Packers’ pick, saying it didn’t make any sense (today he says that they just did it to hose the Seahawks…so I had to explain to him that not everyone’s universe revolves around the Seahawks).  Anyway, I logged onto 538 tonight and I saw this, which made me laugh…not at all covid related: 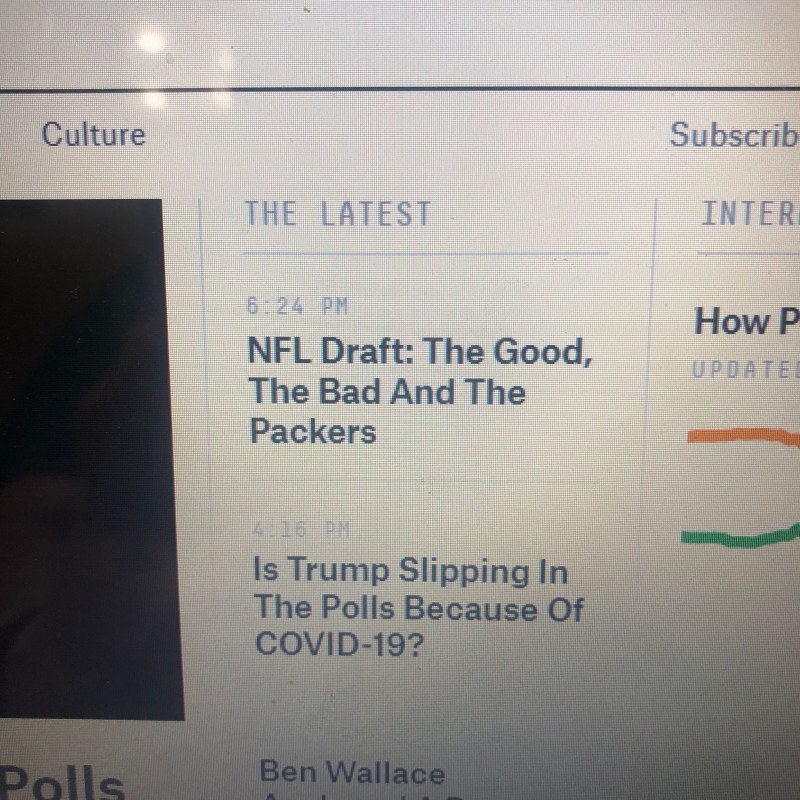 One thought on “Dispatches from Distancing – Day 46”

Dispatches from the Distancing - Day 45

Dispatches from the Distancing - Day 47