I realized that I’ve sort of gone into a bit of a hibernation mode.  I don’t mean that I’m sleeping all the time, but I’ve started to put blinders on to the “real world.”  There are a number of news podcast that I listen to on a regular basis.  Today, I went through and deleted all the episodes in my queue, leaving only my non-news podcasts (although that list is long!).  I basically got off twitter in February (the Bernie Bros were just too much), but I’ve been trying to avoid the news articles on Facebook.  I do sometimes listen to or watch my favorite talking head, but that is about it.

This all came about when I realized I was having…something.  It wasn’t a panic attack, but more like a wave of anxiety that would wash over me and then dissolve.  I would then sit there and try to figure out what exactly caused it…did I forget something?  Nope, just general anxiety.  I put the puzzle pieces together and realized that nothing specific caused it, but rather just reality.  I’m not trying to escape reality. but rather control my experience of the heavy stuff right now.

Because, really, homeschooling is stressful enough.

Today, though, was a decent school day.  Lillie is still looking for more work, but I printed off a bunch of fun worksheets about the Revolutionary War and the Declaration of Independence for her, so that was something.  We’re also working on memorizing the capitals–my father used to quiz me on our road trips, but I don’t see a road trip in our near future. 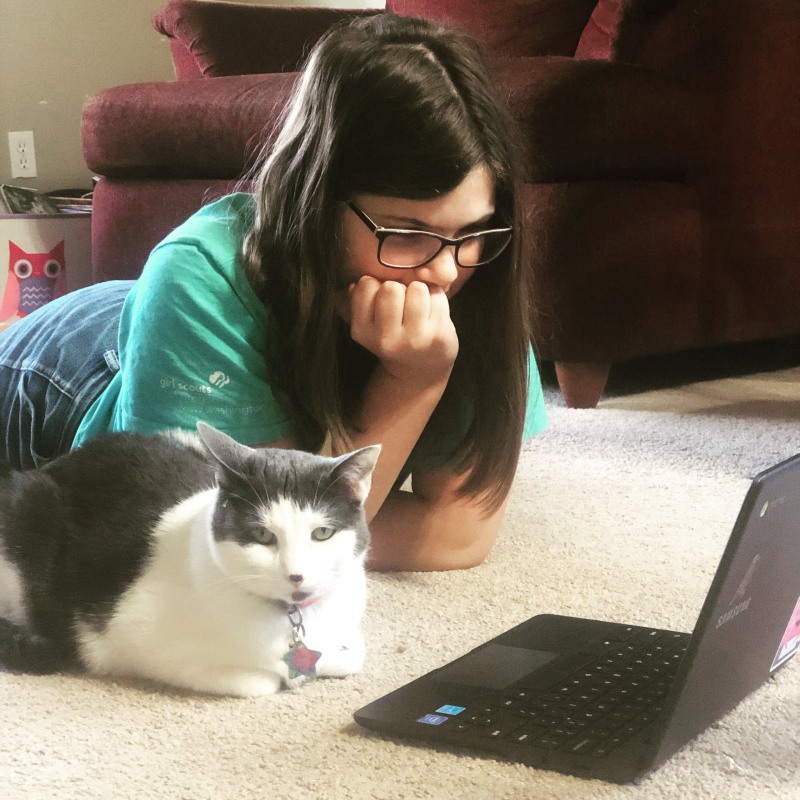 Chris did actually get all his work done today and I found a math resource to help him with his multiplication.  He also started to practice typing, which needed to happen.  He has to type a sentence a day for his vocab and it takes him 10 minutes to hunt and peck all the letters.  Lillie should also be practicing her typing, but she insists that it hurts her hands and she can do it better on her own.  I tried to explain to her that I taught myself how to type (I was never able to find time for a typing class in high school which was, way back then, when they started teaching it) and now I’m a horrible typist, but it is all falling on deaf ears there.

In other news, the tide has turned in our battle against the ants.  We finally found where they are coming from and Pat put…something…there to kill them.  I swear, between the ants and the mice, I’m almost ready to be done with this house.  Then I remember what a pain it is to move and, let’s face it, no one is moving now!

We did, however, make a Costco run today.  I had a few things (like printer paper, since I’m printing pretty much everything these days) to get at Target and placed a pick up order.  Pat had a break between meetings and needed to get out of the house, so we drove over to Costco after picking up my order at Target.  They were pretty well stocked, except for the necessities (toilet paper, cleaning supplies, cold medicine, spam) and it wasn’t crowded.  And we did glove and mask up, which is so…weird.  But they had raisins, so that was a win. Seriously, is it just my neck of the world or is there some sort of raisin shortage?  I’ve been trying to find them for weeks and they’ve been sold out of my usual grocery store since the quarantine began.

I’m off now to start a new book.  I’m not sure what it will be, but The Home for Erring and Outcast Girls is just not working for me.  It might just not be the right time and maybe I’ll try it again at a later date.  The good news is that I have a whole book case of books, plus a plethora of eBooks, to choose from.  I think I just need an escape right about now.

Dispatches from the Distancing - Day 24

Dispatches from the Distancing - Day 26