We’re into double digits and the Stay at Home order came down today.  Since we’ve basically been staying at home (other than my husband’s trips to Lowe’s), this hasn’t really changed too much for us.  As the kids are on Spring Break, such as it is, no homeschooling is happening.  Instead, they alternate between playing with each other and squabbling.

As for me, I’ve been keeping me busy with nothing too exciting.  I haven’t been reading as much as I’d like, mostly because the house tends to be noisy with both kids here.  If they aren’t fighting, they are watching TV.  So, my reading remains a nighttime pastime.

1 – I’ve started a re-watch of The West Wing.  I really enjoyed this show when it first aired, but I haven’t seen it since.  It’s amazing how good broadcast TV used to be and this is still one of the best series I’ve seen. 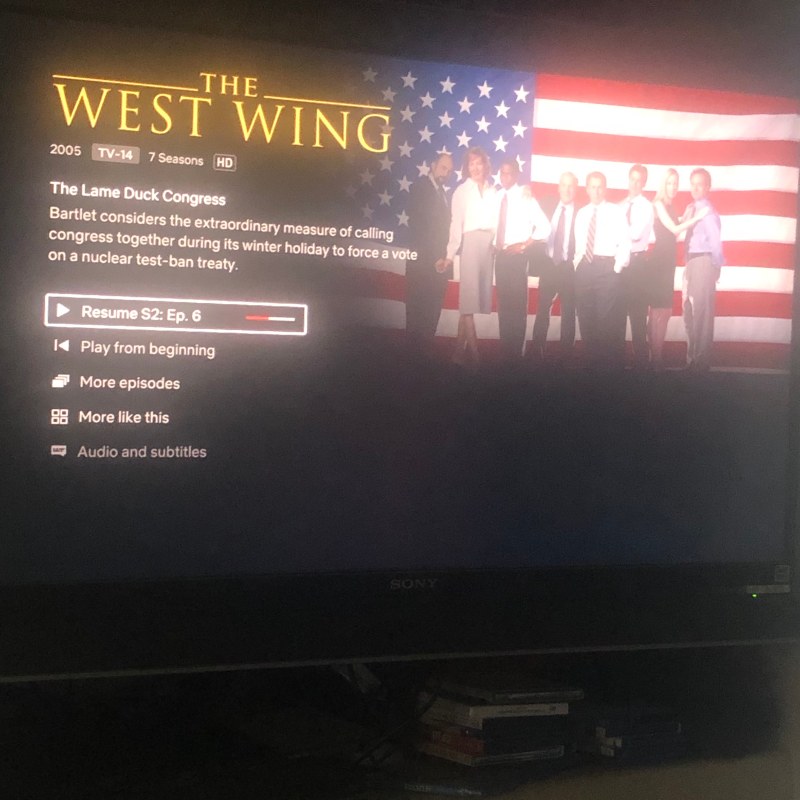 2.  I discovered Self Made on Netflix and am watching an episode of day.  I had heard of this story…somewhere.  Maybe on Stuff You Missed in History Class?  Anyway, it’s incredibly well done.

3. The kids and I enjoy watching The Masked Singer together.  It’s an incredibly stupid show, but the kids love it.  I will admit being a little scarred from “the bear” and her performance, though.

4. I’ve been waiting for Little Fires Everywhere on Hulu since it was announced–I waited to read the book until right before the show dropped.  That may have been a mistake.  I mean, I would probably be less bothered by the show if I hadn’t read the book.  But, it is only 8 episodes, so I’ll stick it out.

5. My guilty pleasure is Drunk History.  It is definitely something for after the kids go to bed, but it makes me laugh and we needs some laughter these days.

6. Pat and I are enjoying Star Trek: Picard.  I’ve never been a trekkie, but I’m really enjoying the two Star Trek shows on CBS All Access.  As I haven’t seen every single Star Trek series (and episode) that has come before, I do have to rely on Pat for some of the background.

7. While I’m not currently watching Westworld, I plan to pick it up once I finish some of my other shows.  I watched the first season and enjoyed it but then just never tuned in for the second season.  So, now is a perfect chance to get caught up.

As for tomorrow, I’m expecting more of whatever the heck today was–TV, books, making sure the kids don’t kill each other, making sure my husband bathes, and maybe some laundry.

Dispatches from the Distancing - Day 9

Dispatches from the Distancing - Day 11