The hubs and I ventured out today.  My long awaited grocery pick up was to be ready at 10am.  So, instead of going to church (which has been canceled for a few weeks, like everything else), we headed to the ClickList pick up.  I had ordered groceries for about dinners.  Instead, I received 3 bags of random items and a 3 pages of items they couldn’t fill.

Since some of these items were things that we really did need (milk, eggs) we decided to risk it and go to Costco.  I was expecting full crisis mode there, but it wasn’t as crowded as it normally is on a Sunday morning.  And they had milk.  And eggs.  And a cart full of other items.  Let’s just saw that we’re set for a while.

Which makes me wonder when the grocery stores will catch up with the demand?  At some point, the trucks with inventory will show up….right?  I can only think that the shortages would last a week or two.  And then what?  More rushes or do people calm themselves and decide not to buy out the store?

I’m asking myself this because I will, sooner or later, need more groceries.  I would prefer to be able to do everything through ClickList, but I also don’t want to deal with only getting half of my order again.

Anyway, grocery shopping is one of many things I pondered today.

I also watched a lot of television today–nothing notable, I was just looking for something to take my mind off things.  At one point, my husband asked how I was feeling and all I could say was, “This is all just weird!”  And it is.  Everyone in my family is healthy, the weather is nice, and yet I feel like we’re just waiting for the other shoe to drop.

The truth is that I don’t personally know anyone who has contracted Covid-19, but I also know that I won’t always be able to say that.  I worry most about my father, who is elderly and has COPD.  He lives in Arizona, which I don’t think is currently a hotspot for coronavirus, but he’s down there essentially alone.  We were supposed to fly down and see him over Spring break, but that is obviously not happening now.  We’ve been nagging him since my mother died to move back up here and I think I may have to take my nagging game up a notch once we are past this crisis.

This is kind of a downer post, but here is a bright spot.  My husband was looking in the cupboard under our sink for something, and look what he found…. 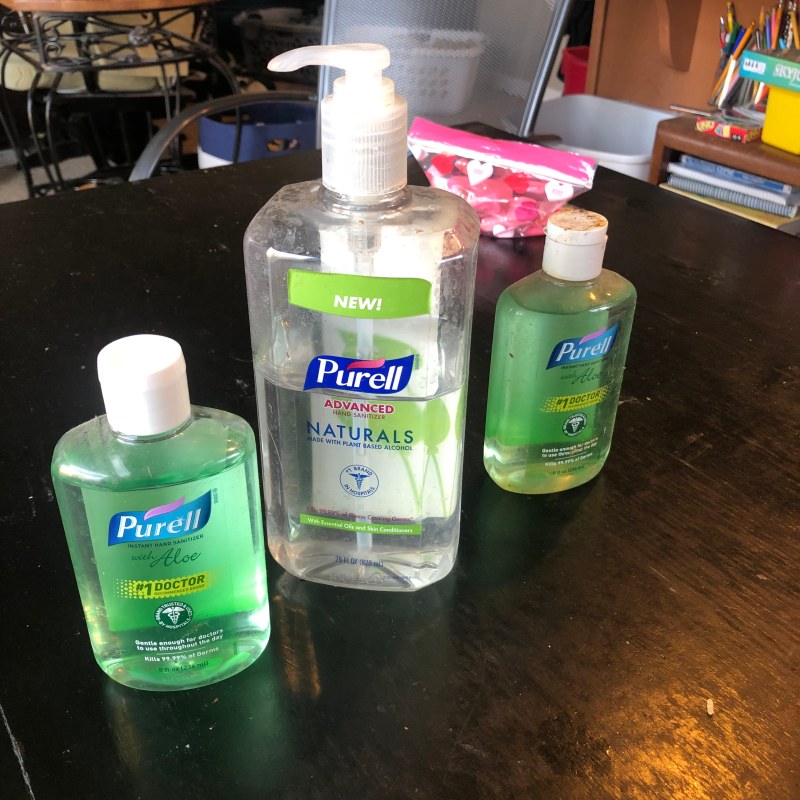 While we depend on good old soap and water while at home, it is a relief to know that we can refill our small hand sanitizer bottles for when we are out (which, let’s face it, isn’t that often right now!).

Dispatches from the Distancing - Day 1

Dispatches from the Distancing - Day 3